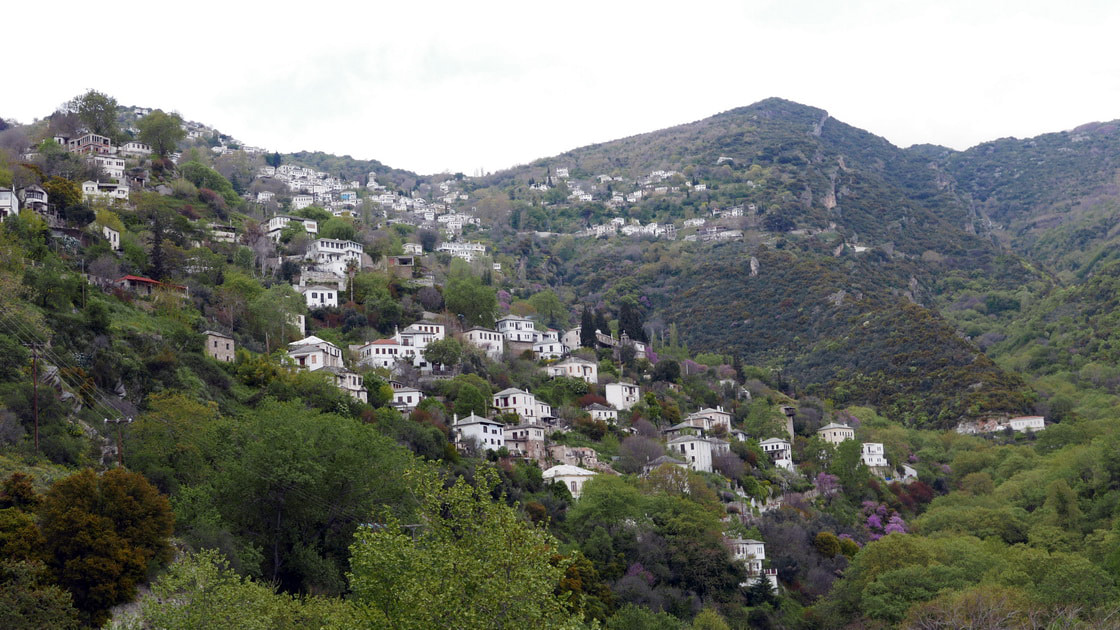 Makrinitsa (Μακρινίτσα) is a traditional village, or rather an extended settlement, situated on the western slopes of Mount Pelion. It is "hanging" high above the city of Volos at an altitude ranging from ± 300 m in lower Koukourava, to ±625 m at the level of the central square or plateia, up to ± 800 m at the higher slopes, around Aghios Gerasimos. ​ 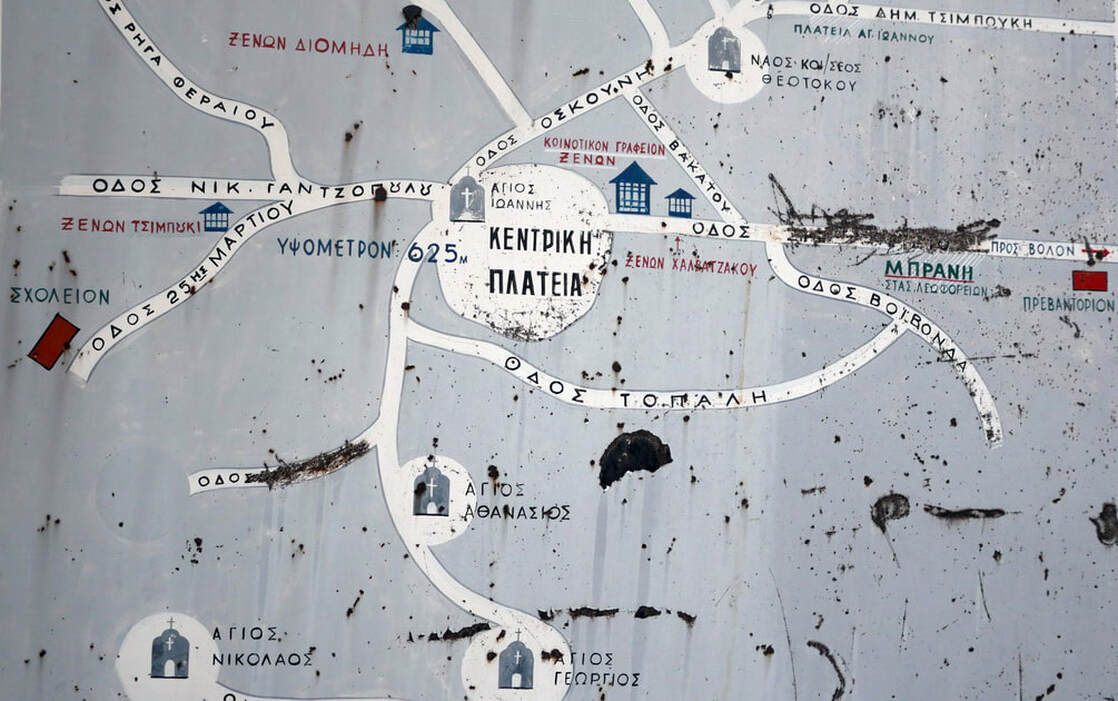 The settlement of Makrinitsa developed from the early 13th century around the important monastery (of the Virgin Mother, Παναγία). At a period when the area was still part of the Οttoman world, the village was interconnected with other settlements and the port city of Volos through a dense network of paved or dirt paths, which are still today available for the exploration of the area. Roads were constructed after WWII, in the the 1950s, and cars are still excluded from the village. Therefore, visitors and locals circulate exclusively on foot, and donkeys  are sometimes still used for transportation of goods or bulky furniture. Albeit the 'modernization' of the Pelion area in the past decades, the villages still maintain a strong local character and are endowed with a lush and 'wild' natural setting.
​
Makrinitsa, together with Portaria (3 kms away) are the two main villages overlooking the city of Volos and the Pagasetic gulf, facing west and south and benefiting from breathtaking views. A thirty-minute drive from downtown Volos, Makrinitsa lies in proximity to the main roadway leading to the top of Mount Pelion (Chania), and from there, to the eastern side of the mountain and the beaches below it (Chorefto, Ayios Yannis, Papa Nero, etc.)

Local architecture shows a mixture of traditions, to be found in the wider area of the Balkans, influenced however quite strongly by neo-classical architecture. Interestingly, this European style of the 19th century did not arrive in the area via Athens, the capital of the new Greek state, which was developed in a neoclassical idiom, but was brought here earlier and independently by local families installed in the Greek diaspora in Egypt and other cosmopolitan centers of the Mediterranean.

​The village is divided into various neighbourhoods, each one centered around a church or chapel and a dense network of fountains, offering fresh water from the mountain springs. The central square (plateia) around the chapel of John the Forerunner (Prodromos) is the center of the village's social, commercial, religious and touristic activities, leaving the lower and upper slopes of the village open to exploration, quiet wanderings and constant changes of "viewpoint".

The village of Makrinitsa is an excellent starting point for exploring the wider Pelion area, staying central while being simultaneously discretely distant; it offers a green and fresh landscape, full of bright shadows in late summer, access to beaches on the gulf and Aegean-side of Pelion, cosmopolitan yet far from the stress of the city. It is a wonderful and inspiring setting for a stimulating, but still relaxed, academic experience.

​
In September 2019, the school celebrated an intriguing 50th anniversary: the filming of a popular screenplay by Dinos Dimopoulos and Finos Films, starring the then-leading and most glamorous stars of Greek popular cinema: Aliki Vouyouklaki and Dimitris Papamichail.  The romantic drama entitled The School Mistress with the Golden Hair, set in the period of WW II, was an adaptation of the pacifist (and openly anti-communist) novel of Stratis Myrivilis, entitled The School Mistress with the Golden Eyes (1933). The book is based on Myrivilis' experience of WW I and the war in Asia Minor (on Myrivilis, see here).
Assorted contemporary views of Makrinitsa ... 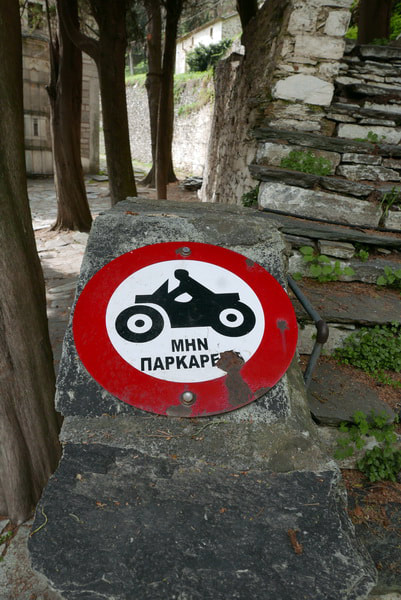 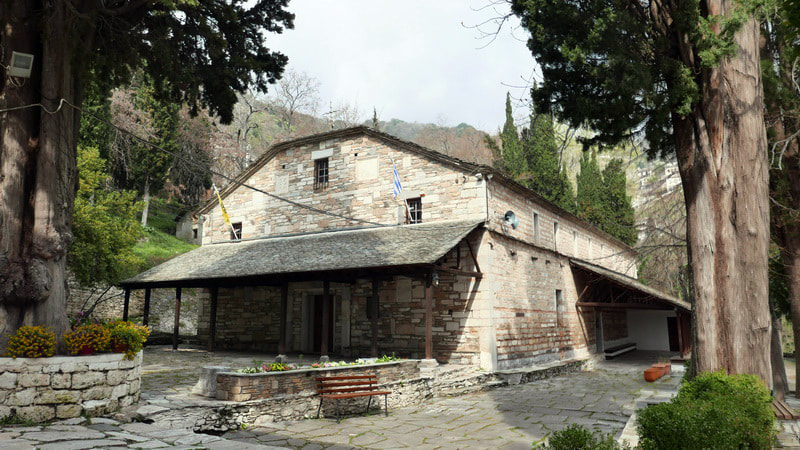 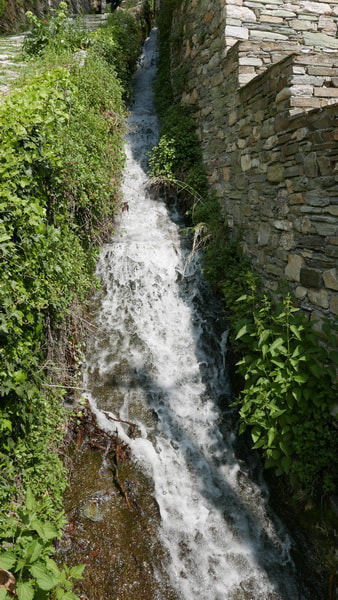 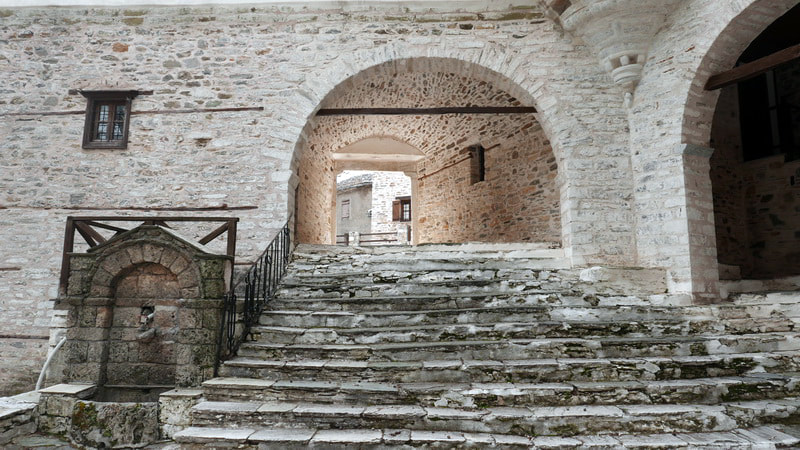